Question: What do you get when left brained engineers and scientists meet right brained creative designers?

Answer: A melding of logical and creative minds to bring together an inspirational event titled ASEI Design Summit.

On October 9th, the American Society of Engineers of Indian Origin (ASEI) convened this Design Summit with a number of academics,  authors, speakers and practitioners covering innovation in Design from multiple perspectives.

After a brief introduction to the organization  by ASEI executive council member Vatsala Upadhyay, and a tribute to design maestro Steve Jobs marking the 10th anniversary of his passing by ASEI President Piyush Malik, he shared his forward thinking views on Design based on his field experiences and learnings working with nimble silicon valley startups as well as fortune 500 corporations around the globe. These opening remarks centered around the importance of Design as a discipline and Design Thinking methodologies adapted from IDEO, Stanford’s d.school and IBM’s enterprise design thinking approach a.k.a  IBM Garage, which is an end-to-end model for accelerating digital transformation.

The keynote speaker Prof Sanjay Gupta who is the founder and Vice Chancellor of World University of Design (WUD) shared his vision illustrating the difference between User Interface (UI) and User Experience  Design (UXD). He also  spoke  about applications of emerging concepts  such as AR/VR (augmented reality /virtual reality ) and innovation in design  in his talk titled “Importance of design for engineers”  based on his many decades of multidisciplinary design experience across Engineering, Architecture, Fashion and Academics.

Engaging Dr Gupta in a fireside chat following this address, Piyush shared some industry trends based on analyst reports and they discussed the impact of design on creator economy with NFT (Non-Fungible Tokens), Blockchain,  AR/VR  etc. Dr Gupta acknowledged the ASEI community and shared the impact WUD has had in its nascent life since inception and cited the importance of partnerships with industry bodies including Assocham, CII and now ASEI to expand its sphere of influence.

Dolly Parikh, Founder and CEO of Aloki Labs, a boutique design studio in California traced her inspiration to the 1977 film “Power Of 10” and shared learnings  from her UX Strategy and Design career across companies such as Apple, Verisign, Experian, Intuit, Medallia, Aviso, Automation Anywhere, InfoStretch, ARM and MindTickle.

UX Architect Noah Iliinsky,  a popular speaker and author of 2 O'Reilly books on visualization enthralled the audience with his data storytelling approach and  emphasised the 4 pillars of effective design viz. purpose, content, structure and formatting. His versatile technique can be applied to not only data visualization but all forms of communications. The illustrations of data in tables versus charts and graphs and when to  choose pie versus line versus bar graphs were eye opening. 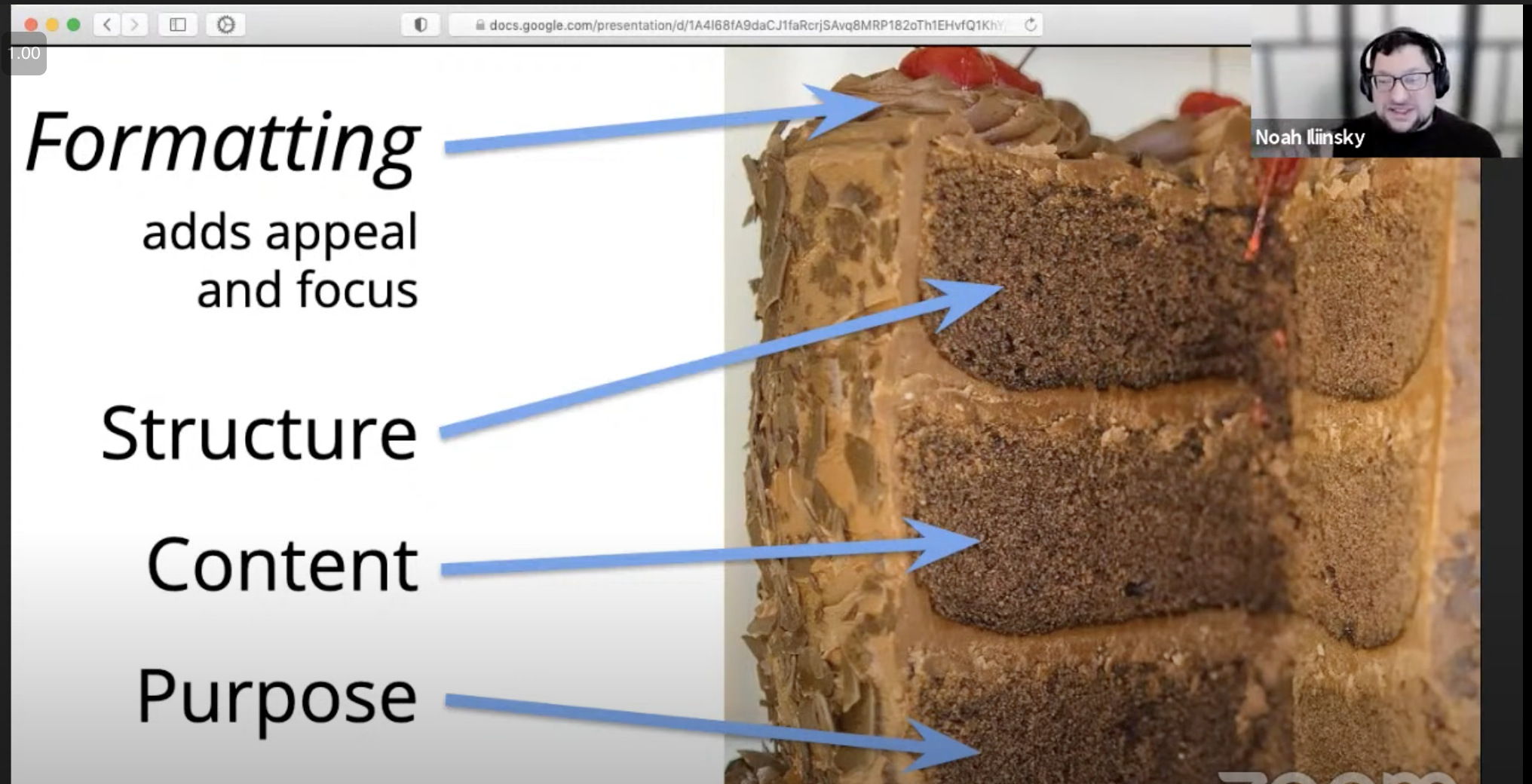 In the next section of the Design Summit focusing on career guidance, Sabira Gupta who is a Software engineer turned Principal UX Designer at Informatica shared her tips for those transitioning into Design careers. She showcased formatting as well as language do‘s and don'ts to inspire the budding designers aspiring for new opportunities  amongst the audience.

Veteran designer Ches Wadja spoke on “Intuition, humility and collaboration in service of design innovation”. Sharing personal stories from his time at Experian as the design head to being the first designer when LinkedIn was a year old startup, Ches mesmerised the attendees with the captivating story of power of being open to ideas and how being agile  and scrapy enabled his seemingly small effort to show marked improvement in Linkedin’s adoption by the masses.The legendary designer also happened to be the first designer at Youtube (which was later acquired by Google) and his designed logo is still used by the company after all these years. It was indeed a pleasure to watch his serene and  calm persona field questions from the audience after the newly minted designer Shrinal Patel  showcased her portfolio and sought feedback from experienced professionals Sabira and Ches to critique as well as give suggestions for improving candidate portfolio presentations. 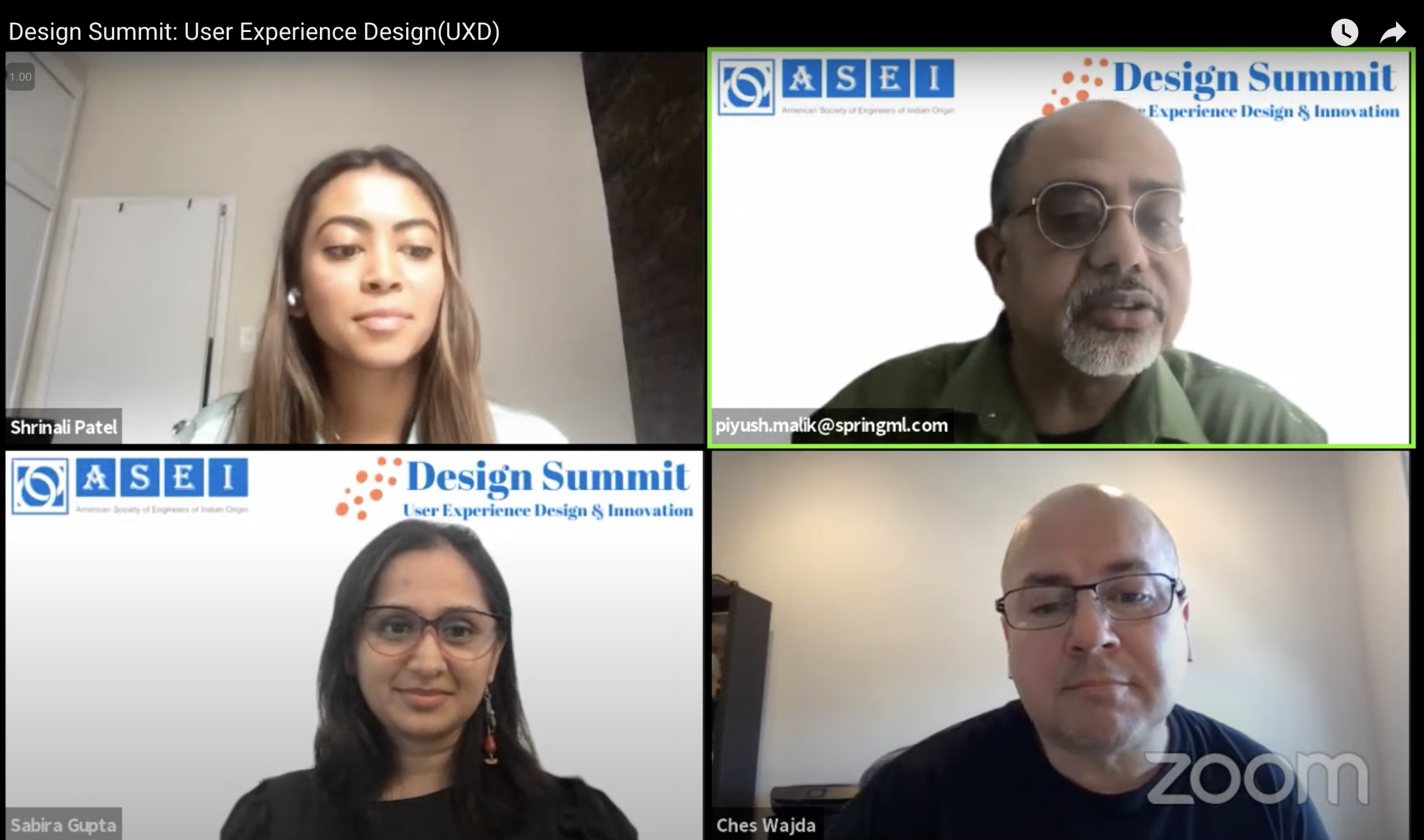 Shrinali  then moderated the brief panel discussion with speakers after which Surbhi Kaul acknowledged all volunteers  and proposed the vote of thanks to the speakers.

Surbhi,  a Vice President  at Juniper Networks was a speaker at ASEI’s 33rd National Convention  and is an ASEI Life Member who serves on the Silicon Valley chapter board. She also gave a “heads-up” & call for volunteers as well as  next year’s board member nominations across all 5 professional chapters.

The moderated Q&A session then “graduated” to  social audio Clubhouse room “Engineering Tales”, where the event continued with a few of the Design summit speakers. It included more non-ASEI members too, all of  whom  were given a chance to interact with speakers of this Summit. John Rodriges moderated the session, sharing his experiences as a UX designer with Citigroup and past jobs. The quality of conversations there once again proved the value of this topic and popularity of design as a discipline  amongst techies as well as non -technical folks. 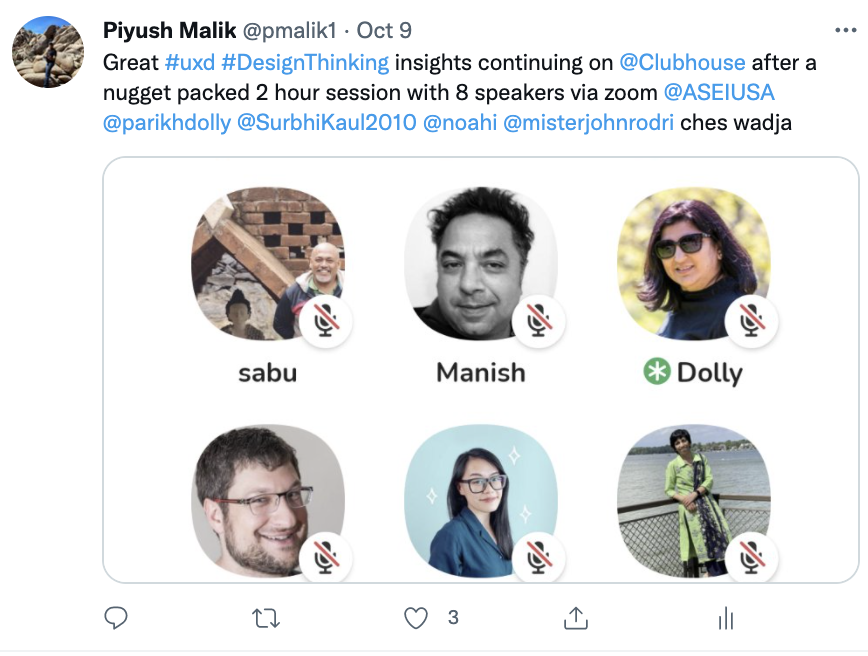 The Design Summit showed the attendees the depth of Design experience and thought leadership amongst ASEI community members and gave a glimpse of the richness of  its collaborations with national and international professional bodies.

As is evident from recent activities  and newsletters, ASEI has had an action packed 2021 so far with a large number of educational and networking opportunities  and new programmes such as MentorConnect, UniversityConnect and YouthPrograms to serve its members’ interests and inspire the next generation of engineers and technologists amongst the diaspora.